I’MPOSSIBLE – We Told You Alex was POSSIBLE! 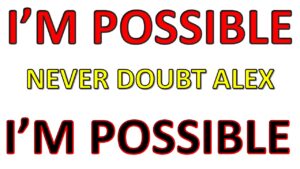 Last Spring Alex made the decision to look outside of the Indians/Guardians to advance his career.  Cleveland had been very good to him for the 5 years he worked there but when advancement was not open, he knew it was time to seek outside of his comfort zone.

You may remember me announcing in the late Spring he took a job with the farm team of the NY Mets.  What he was offered upon his acceptance changed when he moved there and although he tried to make it work, he knew he was in the wrong place, and he returned home.  He began his search in July looking for the best fit – Well today it Happened – Alex is moving to Dallas, TX.

He is excited (and so are his dad and I) about this move where as Binghamton, NY was not an exciting move, but he did meet some great people there and he forged some lasting friendships.  But he will be off to the big city before this year is up and I believe 2023 has a TRIP to Dallas with my name on it.

Do you remember me sharing that we (Alex, his dad and I) were told by a Psychiatrist at the Cleveland Board of Mental Health that Alex would not graduate high school without help, he would never graduate, college and we would place him in a half-way house where he would obtain a menial job.  Well, “F” YOU Dr. Lorna – Alex said he would prove you wrong and he has – not only did he work and advance his experiences with the Guardians he was sought after by various teams; but due to the cost of moving and living he had to turn down offers.  Alex may be on spectrum but don’t tell him he is different – the only difference may be his Will to learn and be his BEST.

We are so proud of our son and always have been.  We have supported and cheered him on when others like Dr. Lorna told us to stop and give up.  Seriously – The Guardians was his stepping stone – and if you don’t believe it – I will continue to share his success …

For those of you who stopped talking to Rich and I when Alex was diagnosed in 1996 – please GO “F” yourselves…When we needed our friends and Alex needed to be accepted for being the same person he was before his diagnosis – you deserted us.

To the Bully who assaulted our son in High School and to the students and faculty who saw it happen – it’s time to come forward and apologize to Alex.  The Bully may not be around to apologize but there are plenty of YOU out there who can!!!

Back to the people we thought were our friends- you obviously weren’t!

Alex has taught our family to overcome adversity.

Posted in Uncategorized | Comments Off on I’MPOSSIBLE – We Told You Alex was POSSIBLE!