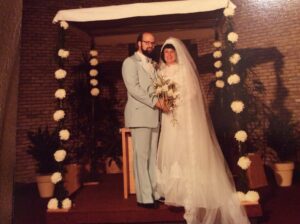 Today is a SPECIAL DAY – one of my truly BFF’s and her Prince Charming got married 39 years ago today (and thanks to Prince’s mother the beautiful Iris,) I met my Prince Charming the day before at their rehearsal dinner!
I met Helene right after I separated from my ex-husband, she became not only my friend but also a sister, cousin, aunt, and sometimes mother of advice. Helene is the best friend everyone wants. She understands you (me), and even though we can go months and sometimes years without a real conversation, our connection is honest and robust. I have known my BFF 40 plus years, and we will continue this friendship for eternity.
It’s a funny story about how I met Richard the day before their wedding. Rich, the friend of the groom (Lanny), was also the videographer for their wedding, and in my life, at that time, I had a plant and floral business, so I was their floral designer as well. As we met at the Temple for the rehearsal, in walks Richard in a white suit – reddish cropped beard – looking like he owns the place and I mistake him for the Rabbi (only to learn later he was not, and he also wasn’t Jewish, OH MY!)
Rich and I collaborated on the ceremony details, and at the end of rehearsal, I went home while the rest of the party went to dinner. (This was in the days before Cell Phones!) When I walked into my townhouse, I heard a message playing on my answering machine, and it was Lanny suggesting I come to the dinner, Richard requested my presence, and Iris was quick to accept his wish. Without thinking twice, I turned around and went to the dinner.
At dinner, I felt like Richard, and I had known each other for years. We sat with four of his friends, and they included me as if we were all life-long companions. After the dinner, the guys separated and went to a mini bachelor party held in the hotel room of one of the male guests, and the women went back to Helene’s place, and chit chatted. I don’t think an hour elapsed before Rich and Will (Lanny’s brother-in-law) came over to Helene’s room, suggesting that it may be more fun hanging with the females, and slowly the other men converged on the room too.
By this point, Rich and I were on a mini date.
The next morning, I had to get up early to pick up the flowers and set-up the Temple (the Chuppah), and my new pal Rich, helped. That whole day we were inseparable, and when Helene arrived at the Temple to get dressed and have me prepare her make-up, she was smiling from ear to ear. Although she wasn’t sure, Richard was my perfect Prince Charming; she had witnessed the immediate connection. She gave me some words of wisdom, “BE CAREFUL!”
The wedding was beautiful, and the appropriate number of happy tears were shed. Rich and I took a stroll down the aisle right after I fell catching the bridal bouquet. I could say the rest is history because June 13, 1981, Rich and I met, and now we have been married 36 years because of the union between two of our friends and the huge heart of Iris Light.
Helene and Lanny have been extended family since that day 39 years ago, attending family events as well as accepting the honor to be our son’s God Parents.
In addition to Lanny and Helene, we gained Will and Cindy Metzger (brother-in-law and sister to Lanny.) We have been blessed because of their union on this day in 1981.
If you had told me on June 12, 1981, I would meet my Prince Charming, and thirty-nine years later, after many detours in our lives, the four of us would still have a lasting relationship despite – Sickness, Health, Richer and Poorer we are still standing strong!

Happy 39 years to Helen and Lanny Light, may you continue to LOVE!