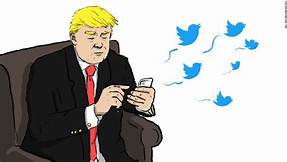 Donald Trump was pissed off that Governor Gretchen Whitmer didn’t thank him after the militia group was arrested (eight real nasty looking goons) and stopped from kidnapping and murdering her. He felt she was ungrateful. Just a little side note: Joe Biden called Gov. Whitmer after this event unfolded today to make sure she was okay and thanked HER for her courage. Donald Trump literally tweeted nasty shit about her. It was Mr. Trump’s inability to call out Militia groups and denounce them; he empowered them. He ignited them. He encouraged them. They were ready to violently act today because of his words: stand back, stand by.
We have a criminal living in The People’s House and he is vicious and vindictive and insane. And I say this from the bottom of my heart: if you’re a Republican and believe what this man is doing serves your party then you are not a Republican. This isn’t a party, it’s a fucking cult. He’s a bully leader and he’s a sick man – mentally & physically – and someone needs to have the balls, the fierce as fuck balls, to get him out of the house before he blows up all our lives.