LAWRENCE S. KATZ- Author- And So Much More! 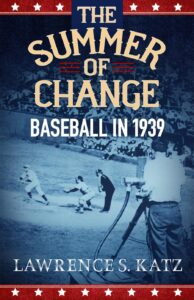 I am pleased to introduce you to my guest on Lessons Learned this Friday, February 12, 2021, when my friend Lawrence S. Katz talks BASEBALL

Lawrence S. Katz has written numerous articles about baseball for publications including Sports Collectors Digest, The Baseball Research Journal, and Primo Magazine. He contributed a chapter entitled “When Immortals Returned to the Minors” for The Perfect Game, an anthology published by the Taylor Publishing Company in 1993 and by Barnes & Noble in 1995.

This work is a revised edition of his book Baseball in 1939: The Watershed Season of the National Pastime, published by McFarland and Company in 1995 and 2012.  The book, and his abstract titled “Baseball & Cultural Change in the Late 1930s,” are included in the Baseball Hall of Fame Library collection.

Katz has spoken on a variety of baseball subjects, including Depression Era baseball at the Baseball in Literature and Culture Symposium at Indiana State University, the recent return of minor league baseball to the Detroit area,  and the All-American Girls Professional Baseball League – featured in the movie A League of their Own – at a dinner honoring former player Rose Gacioch.

He realized his dream of appearing on a major league pitching mound before a packed house when he sang the National Anthem with a choral group at Tiger Stadium in Detroit in 1988.

He has been a member of The Society for American Baseball Research since 1983.

Katz received his J.D. from Wayne State University Law School in 1972. He lives in Michigan with his wife, author Karen Tintori Katz.

Posted in Awareness, Book, Entertainment, Life, Listen, Sports | Comments Off on LAWRENCE S. KATZ- Author- And So Much More!