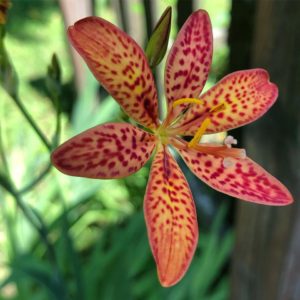 I marvel at the idea of a seed. The power, the information, the possibility that lives inside a very tiny thing. It’s the beginning. It honestly makes me teary-eyed and shiver with delight. I get to use my imagination, trust and believe, dream of the future of what something, can possibly become. Whether this seed is one that is visible to me, that may grow into a plant or flower, or a seed of thought that has the ability to expand and become something more, to transform peoples beliefs, either way, the potential is there. A number of years ago, I was at the home of Bill Charlap and Renee Rosnes preparing for a photoshoot with Bill and his mother Sandy Stewart for their CD “Something to Remember”. I was in the backyard where these beautiful delicate lilies were growing and was overcome by them. It was September, the time of year when some had gone to seed, Renee reached in and plucked some off and placed them in my hand. We transferred them into a little envelope and I took them home. That next year I planted them in small containers so I could identify them and care for them while they sprouted. At the end of the summer, they had grown big enough for me to transplant into the ground. It took a few years of watching them, watering them until I actually got a flower. Now seeing them grow in my backyard, I think about that day when Renee handed me those seeds. It gives me a lift, it all has to start somewhere, and sometimes it’s just a simple gesture. That thought is the fuel that powers this little engine… “I think I can, I think I can, I think I can”.
@reneerosnes #lily #seed #seeds #believe #backyardgarden

Posted in Uncategorized | Comments Off on SEEDS by Terri-Lynn Pellegri