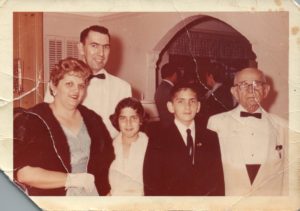 My Darling Mother DVasha, My Dad J Harmon, Me, Joel aka Joelie and my Zayde

Fifty years ago (based on the Hebrew calendar) an exceptional man by the name of Louis “Label” Freedman passed away.  I knew this man by the name, Zayde.  My memories are filled with some extraordinary photos that I can see in the back of my mind.  I remember spending the day with my Baube and Zayde at their small apartment in the city of Detroit (before they moved to the Blackstone Manor in the burbs.)  If I remember correctly their apartment was on the second floor.  When you walked in the door to their unit if you went to the right, it took you to their bedroom, and if you turned to the left, it went into the living room and off the living room was a tiny kitchen.

On the days I spent at their house (while they babysat me) my Zayde and I would take a walk down the street.  At the end of the road, there was a little store that sold pretzel logs, and he would buy me one, and I would pretend to smoke it as he puffed away on his cigar (that he also purchased at the store.)  Next door was a tailor shop, and since my Zayde was a tailor by trade, we would stop in, and the owner of the shop and my Zayde would converse in Yiddish.  On our way back to the apartment he would stop and buy his Yiddish paper, and upon our return, he would sit in his chair and read the paper and fall asleep.

Usually, when I got back to the apartment, I was a tired little girl, and I would often curl up on their “horse haired” couch, and despite the scratchiness of the fabric, I would fall asleep.

Those were the very early days but not too long after that when I turned nine, my Baube died, and Zayde came to live with us for awhile.  He would dress up every day like the Beau Brummel of his time, with a white shirt, bow tie and a suit every day.  He would ask my brother Joel each day, “kenen ir redn eydish” Can you speak Yiddish?  And of course, Joelie always said “abis,” a little!

Since we lived a hectic lifestyle even back in the early 60’s, our home after a while was not suited for “Label’s” needs and he moved to the Home for the Jewish Aged.  How different senior citizens home have come over the years, I remember it being scary to visit him there and yet every Saturday my mother and I would join one or both of her sisters to visit Zayde.  We often would find him sitting on a chair outside of his room or occasionally in the courtyard trying to court a lovely lonely resident.  At 2 pm on Saturday’s, they offered tea and cookies to the residents and their guests in the dining room.  We would sit there and sip tea not from cups but glasses, what a memory!

My memory is still very clear, and I want my sons, nieces, and nephews to know how things have changed but what hasn’t is despite my fear of going to the home I went because I loved my Zayde!

When Zayde died in June 1968, we had only been back in Michigan a very short time, just months.  June was to be an important month with my graduation from high school, my dad’s birthday, my parent’s anniversary and my brother Joel’s return from Europe.  However, life and death, and the celebrations were placed on hold to honor this man who came from Russia and traveled to a foreign country, the United States, to create a life for himself and his bride and daughter.  Upon establishing himself, he returned to his village in Russia only to witness the destruction.  It took him time to relocate his wife who presented him with his second daughter.  Unknown to him when he came to America the first time, my Baube was with child.

Once again, they came across the Atlantic via steerage passage and found their way back to Detroit.  My Zayde was a survivor, and today I am one too. 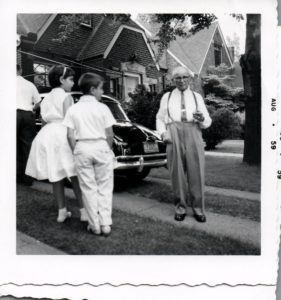 Posted in Uncategorized | Comments Off on 50 Years Ago